It’s no secret we need a better web. The original vision of an open and decentralized network that’s universally accessible continues to be a north star to those working to design the future of digital infrastructure for everyday people. The dire state of cybersecurity and privacy on the internet, in the shadow of monolithic social networks purporting to bring people together, present significant barriers to access for too many of our most vulnerable populations. We started MATTR because we believe that standards, transparency, and openness are not only better for users; they make for stronger systems. We realized the value that a decentralized web of digital trust, based on transparency and verifiable data, could bring to the world as a whole and the opportunity it represents to give people real agency and control over their digital rights.

At its inception, we chose “MATTR” as a moniker because we strongly believed that the movement towards more decentralized systems will fundamentally change the nature of data and privacy on the internet. Matter, in its varying states, are the building blocks of the universe, symbolically representing the capacity for change and transformation that allows us all to grow and adapt. In another sense, people matter, and the impact of decisions we make as builders of technology extend beyond ourselves. It’s a responsibility we take seriously, as Tim Berners Lee puts it, “to preserve new frontiers for the common good.” We proudly bear the name MATTR and the potential it represents as we’ve built out our little universe of products.

In September 2020, we introduced our decentralized identity platform. Our goal was to deliver standards-based digital trust to developers in a scalable manner. We designed our platform with a modular security architecture to enable our tools to work across many different contexts. By investing deeply in open standards and open source communities as well as developing insights through collaboration and research, we realized that developers wanted to use something that was convenient without compromising on flexibility, choice, or security. That’s why we launched our platform with standards-based cryptography and configurable building blocks to suit a broad array of use cases and user experiences.

At the same time, we’ve continued to work in open source and open standards communities with greater commitment than ever to make sure we’re helping to build a digital ecosystem that can support global scale. We launched MATTR Learn and MATTR Resources as hubs for those interested in these new technologies, developing educational content to explore concepts around decentralized identity, offering guided developer tutorials and videos, and providing documentation and API references. We also unveiled a new website, introduced a novel approach to selective disclosure with verifiable credentials, built a new messaging standard, and made a bridge to use credentials with OpenID Connect. We’ve consistently released tools and added features to make our products more secure, extensible, and easy to use. In parallel, we recently joined the DHS SVIP programme to help advance the goals of decentralized identity in a transparent and globally-visible manner. Zooming out a bit, our journey at MATTR is part of a much larger picture of passionate people working in collaborative networks across the world to make this happen. 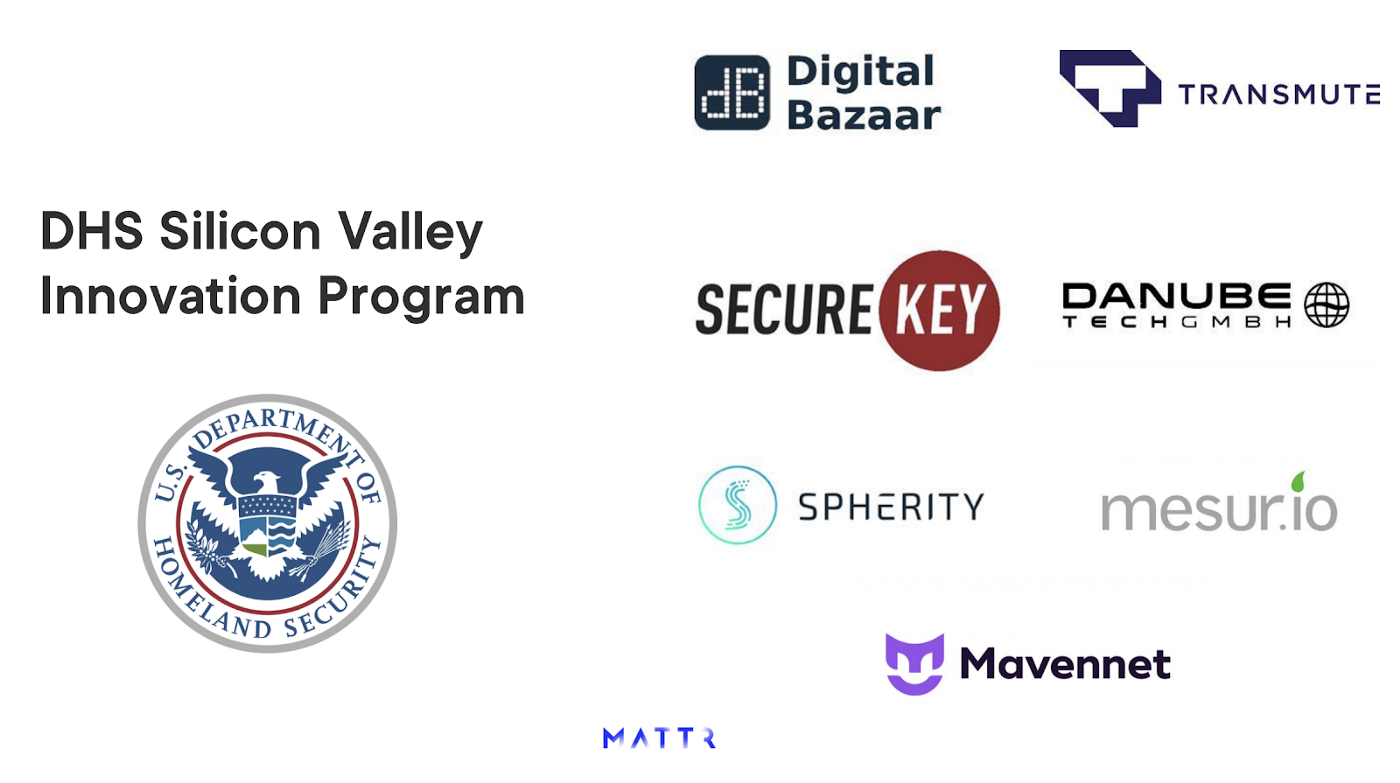 2020 has been an incredible year for decentralized and self-sovereign identity as a whole. In light of the global-scale disruption of COVID-19, the demand for more secure digital systems became even more critical to our everyday lives. Start-ups, corporations, governments, and standards organizations alike have been heavily investing in building technology and infrastructure to support an increasingly digital world. We’re seeing this innovation happen across the globe, from the work being done by the DHS Silicon Valley Innovation Programme to the Pan-Canadian Trust Framework and New Zealand Digital Identity Trust Framework. Many global leaders are stepping up to support and invest in more privacy-preserving digital security, and for good reason. Recent legislation like GDPR and CCPA have made the role of big tech companies and user data rights increasingly important, providing a clear mandate for a wave of change that will strengthen the internet for the public good. This provides an incredible catalyst for all the work happening in open-source cryptography and decentralized computing as well as digital governance. Just last year, we’ve seen the following advancements:

These are just a handful of the significant accomplishments in the past year. It’s been incredibly inspiring to see so many people working towards a common set of goals for the betterment of the web. As we’ve built our products and developed alongside the broader market, we’ve learned quite a bit about how to solve some of the core business and technical challenges associated with this new digital infrastructure. We’ve also gained a lot of insight from working directly with governments and companies across the globe to demonstrate interoperability and build bridges across different technology ecosystems.

We’ve been hard at work making our decentralized identity platform better than ever, and we’re proud to announce that as of today, we’re ready to support solutions that solve real-world problems for your users, in production — and it’s open to everybody. 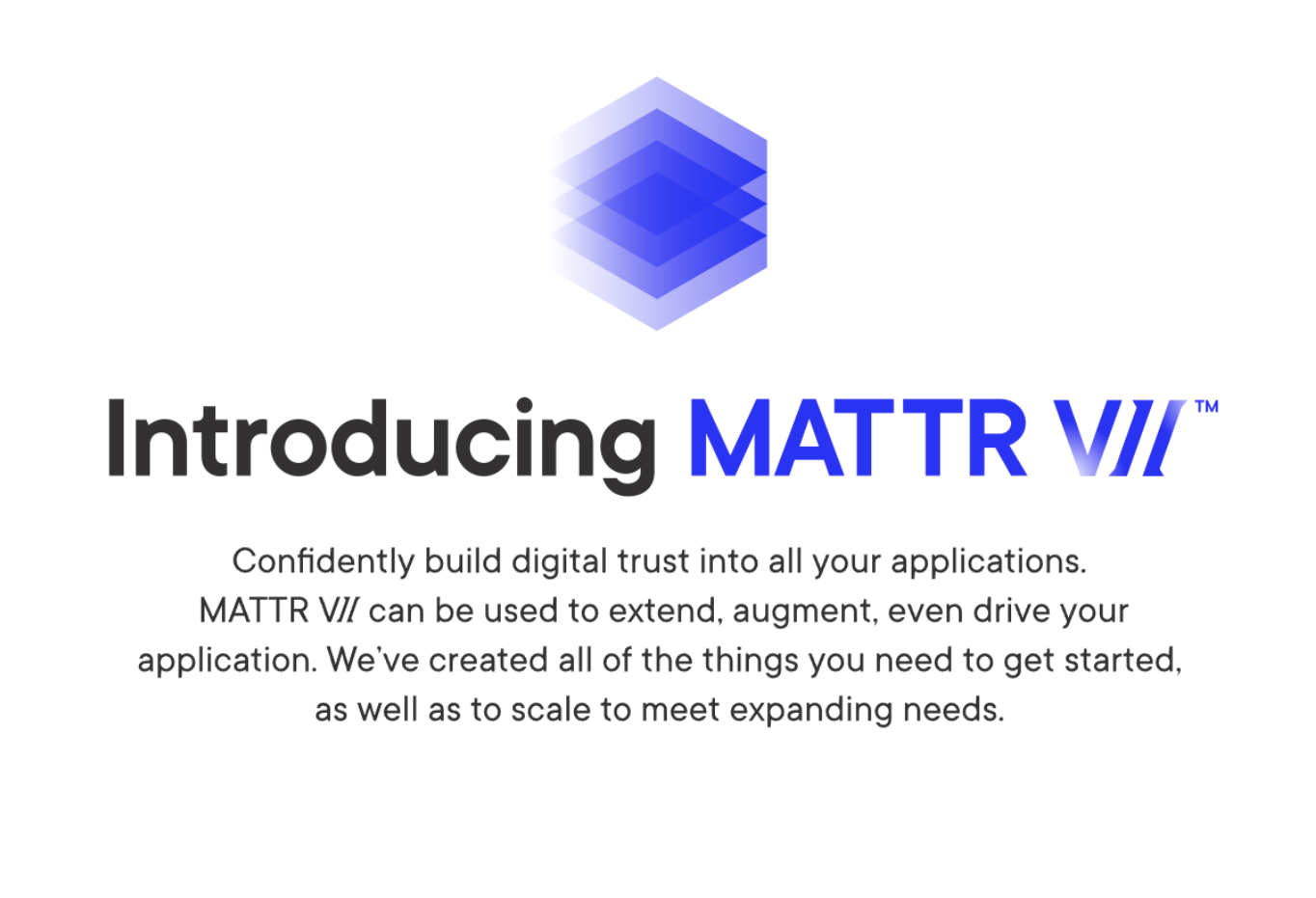 That’s why we’re rebranding our platform to MATTR VII. Inspired by the seven states of matter, our platform gives builders and developers all the tools they need at their fingertips to create a whole new universe of decentralized products and applications. We provide all the raw technical building blocks to allow you to create exactly what you have in mind. MATTR VII is composable and configurable to fit your needs, whether you’re a well-established business with legacy systems or a start-up looking to build the next best thing in digital privacy. Best of all, MATTR VII is use-case-agnostic, meaning we’ve baked minimal dependencies into our products so you can use them the way that makes the most sense for you.

The VII States of Matter

Starting today, we’re opening our platform for general availability. Specifically, that means if you’re ready to build a solution to solve a real-world problem for your users, we’re ready to support you. Simply contact us to get the ball rolling and to have your production environment set up. Of course, if you’re not quite ready for that, you can still test drive the platform by signing up for a free trial of MATTR VII. It’s an exciting time in the MATTR universe, and we’re just getting started.

But we’re not stopping there — we’re continuing to build-out features to operationalize and support production use cases. To this end, in the near future we will be enhancing the sign-up and onboarding experience as well as providing tools to monitor your usage of the platform. Please reach out to give us feedback on how we can improve our products to support the solutions you’re building.

We’re excited to be in this new phase of our journey with MATTR VII. It will no doubt be another exciting and productive year for decentralized identity, bringing us closer to the ultimate goal of bringing cryptography and digital trust to every person on the web.